We've paired this article with Laurie Hatten-Boyd's AP Tax Compliance webinar. Get your Executive Summary to find out how FATCA requirements impact organizations with a global supplier base.
Get the FREE guide
Home / Resources / Guide / 1042-s

In general, nonresident aliens who receive income in the United States are subject to U.S. federal taxes. This income of non-U.S. citizens can be in the form of earned income or other types of payment. The Internal Revenue Service wants to know about these payments to receive income tax returns from these taxpayers.

It’s important to know what IRS Form 1042-S is and how the process works by reading these FAQs.

Form 1042-S  is an IRS form titled Foreign Person’s U.S. Source Income Subject to Withholding. Form 1042-S is an information return filed by a withholding agent to report the amounts paid to foreign persons, as described under the “Amounts Subject to NRA Withholding and Reporting.” Form 1042-S applies even if filers didn’t withhold any income tax.

IRS Form 1042-S is a required document for reporting money paid to foreign persons (or those presumed to be foreign) by a U.S.-based business or institution.

Non-US citizens or non-US groups, including foreign partnerships, corporations, estates or trusts, use Form 1042-S to report any US-based income they may have received to be accurately taxed on that income, according to US standards. In cases where a tax treaty or other exception to taxation exists, the IRS will still require Form 1042-S to be completed.

What Types of Payments Do You Report on Form 1042-S?

When the 1042-S form is used to report a scholarship or fellowship grant of a foreign national, only the amount over the cost of tuition is reportable.

Compensation from services conducted in the U.S. includes:

• Compensation for independent personal services performed in the United States, and

• Compensation for dependent personal services performed in the United States (but only if the beneficial owner is claiming treaty benefits).

In cases where there is more than one type of income, multiple forms must be used. For example, if one person received pension income and royalties, you must use a 1042-S for each.

Under the tax laws of the United States, Form 1042-S is not used to report wages for income tax purposes. Instead, Form W-2 should be used.

Take the treaty between Morocco and the United States. Moroccans who work as independent contractors in the U.S. are exempt from taxation up to $5,000 in total income. This is only under certain guidelines.

What Do You Need to Know about Filing Form 1042-S?

Form 1042-S should be filed regardless of whether tax is withheld or not.

Furthermore, one form must be completed for each tax rate. This is for any given type of income that’s paid to the same earner.

Although Form 1042-S can be filed the old-fashioned way, the IRS does permit electronic filing of the form. The newer electronic method is actually required for withholding agents who have 250 or more forms to submit. Financial institutions are also required to file electronically.

Only one 1042-S should be filed per calendar year. It is due on March 15th of the year after the relevant payment was made.

If you need more time to file Forms 1042-S, the IRS will grant an extension. To gain more time, you will need to file Form 8809 (Application for Extension of Time to File Information Returns) by the due date of Form 1042-S. Keep in mind that there is no extension for the payment of tax.

Failure to file a 1042-S on time without an extension or not paying any tax due could result in interest and penalties from Uncle Sam.

The 1042-S form should not be used for income tax purposes. To report income, Form 1042 (Annual Withholding Tax Return for U.S. Source Income of Foreign Persons) should be used. Withholding agents should file 1042 with the IRS instead of with the employee.

If Form 1042-S is filed in hard-copy format, it must be accompanied by Form 1042-T (Annual Summary and Transmittal of Forms 1042-S). One T Form should be used for each type of S form submitted.

Bring scale and efficiency to your business with fully-automated, end-to-end payables.

We describe some boxes (line items) in Form 1042-S and provide a screenshot of the IRS 2021 form. Read the IRS Form 1042-S Instructions for more details. 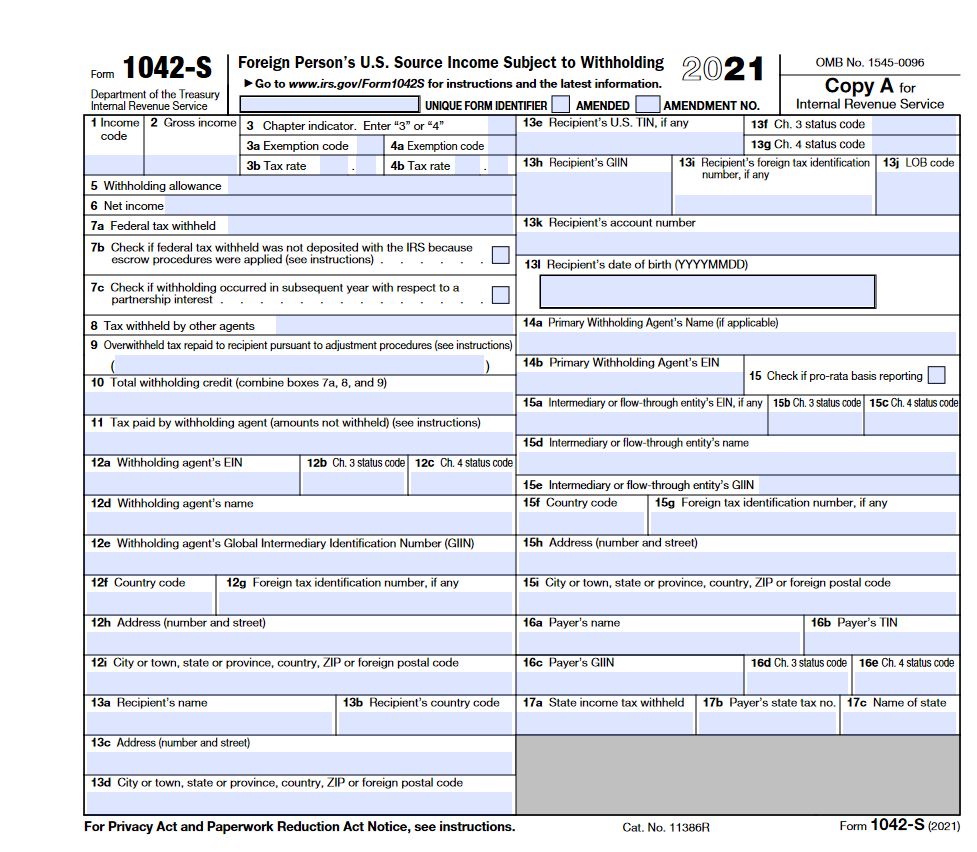 Box 1 on Form 1042-S is critical, as this requires the income code that classifies a payment. One form can only have one code. If you’ve received multiple payments from several codes, more than one form must be filed.

In Box 2, for gross income (not net income), enter the entire amount paid to the recipient, including tax withholding, for each type of income.

Box 3 is the place to enter Chapter 3 or 4. The former is for withholdings that apply to foreign persons, while the latter is for entities that are foreign financial institutions.

If the tax rate entered in Box 3a or 4a is zero, enter an exemption code 01 through 23 from IRS Appendix B of Form 1042-S Instructions in either 3b or 4b, depending on the chapter indicator.

Enter the country code of your residence from the IRS list of foreign countries accessible from Form 1042-S Instructions in Box 12f or OC if that country isn’t included in the IRS list.

In Box 13f or 13g enter the recipient status code from IRS Appendix B to Form 1042-S Instructions.

Boxes 17a through 17c relate to any state income tax withheld.

In Box 17b, enter the payer’s state tax number.

If you are still unsure about which forms to file, it’s always best to read Form 1042-S Instructions, visit the IRS website at ww.IRS.gov, or contact the IRS directly.  Don’t take a guess and make a costly mistake.

What is a Balance Sheet? : Formula & Examples What is Inventory Management? Examples & Benefits Square vs Paypal: Which One Should You Choose? What is Business Email Compromise (BEC)? Income Statement Definition, Formula & Importance What Do You Need to Perform an ACH Transfer ? Top Procurement Softwares in 2022 Top 11 Accounting Problems & Solutions in 2022 What are Real Time Payments? How RTPs Work ACH vs Wire Transfer - What's the Difference ? What are Payment Rails & How do They Work? How to Set Up Direct Deposit [Complete Guide] Horizontal vs Vertical Integration The Complete Guide to Vendor Selection Process The Top Payoneer Alternatives for 2022